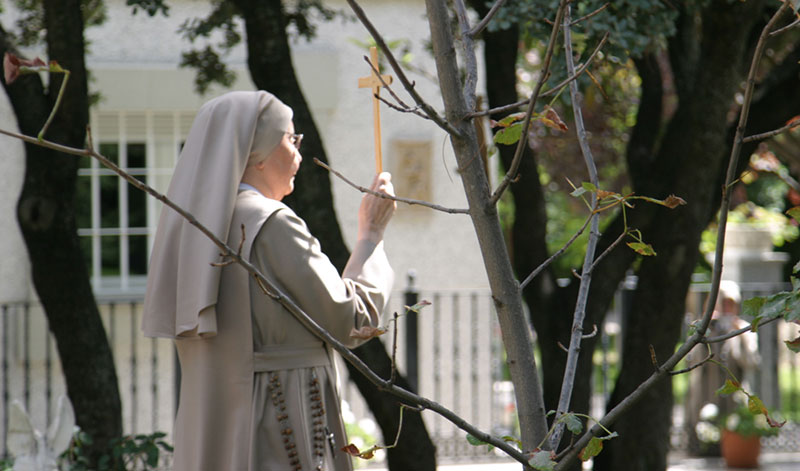 A brief account of the life of our Mother

Our beloved Mother María de Jesús was born in Santander, Spain, on Holy Thursday, April 9, 1925 to an affluent and very devout family. She was the youngest of the four children - Calixto, Carmen María, Carlos and Cristina Ana María - that God granted to Prudencia Gil de Lamadrid and Calixto Velarde Gómez.

On the 20th of April, 1925, she received the sacrament of Baptism in St. Francis Parish (Parroquia de San Francisco). Her godparents were her brother, Carlos, and her sister, Carmina. When she was four years old, on the 17th of March, 1930, she received the sacrament of Confirmation from the hands of Bishop José Eguino y Trecu, commonly known as the "Good Bishop," in Consolation Catholic Church (Iglesia de La Consolación). She received the Sacrament of the Holy Eucharist for the first time in St. James Parish (Parroquia de Santiago), in Madrid, the 21st of May, 1933, Solemnity of the Ascension of the Lord.

During the Second Spanish Republic, her family moved to Madrid and stayed there from 1932 until 1937, a difficult trial of detachment for her because of her great love for her hometown. During her adolescence and young adult years, she lived and attended high school in Barcelona. She always stood out for her compassion toward the most disadvantaged among her classmates. On the 28th of February, 1939, while in the presence of the Blessed Sacrament exposed at the moment of Benediction, she saw clearly that God wanted her to belong entirely to Him. She was 14 years old. From that moment on, she understood that she needed to respond to her vocation as soon as the Lord allowed it and never questioned God's calling.

She went on to study at the University of Barcelona, pursuing Philosophy and Liberal Arts with a major in General History. She finished her college career with highest honors on June 6, 1951 at 26 years of age.

With a promising future, she left everything behind

She met the Congregation of the Daughters of Our Lady of the Sacred Heart at their novitiate in San Cugat del Vallés in Barcelona. She was docile to God's will which was manifested to her in such a simple way and decided to leave everything behind to join the community on October 26, 1951. Two days later, on the Solemnity of Christ the King, she entered the novitiate, taking the religious name Sister María de Jesús. Very soon after that, she became one of Mother María del Carmen´s indispensable, all-purpose helpers, due to her keen foresight. 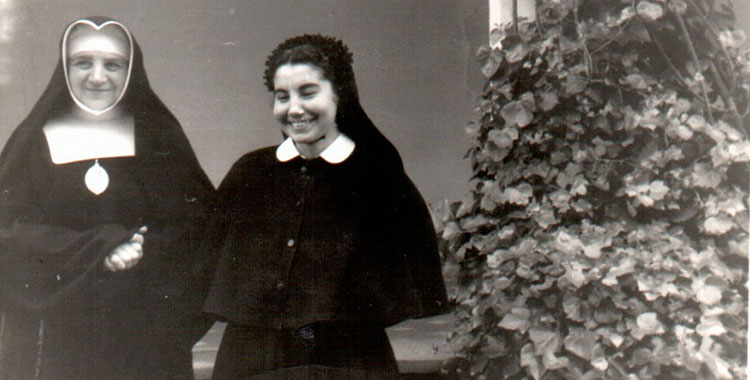 The beginning of a mission

The first apostolic work that she founded, under the direction of Mother María del Carmen, was the school "El Pinar de Nuestra Señora", located in Valldoreix, Barcelona. In spite of great economic scarcity from the very start, God blessed the school and, in 1954, she became the Superior of the community and Headmistress of the school. Three years later, she brought to fruition the fulfillment of dream that she had held in her heart from the age of 16: an aspirant house for girls to help them discover the vocation to which God was calling them. She named it “La Peña,” which in Spanish, implies high ideals, firm as rock, that rise above the flat plain. Now called "Las Mieses", it has become the first of other Aspirant Houses opened in the Americas and has proved to be fertile soil for the formation of youth where the seed of the religious vocation can grow and solid preparation for all states of the Christian life is received.

The teaching identity that characterizes us as an Institute and that marks our 11 “Madre Velarde” schools is expressed in the Educational Mission Statement that our Mother wrote for "El Pinar" and in the legacy of the many years she dedicated to the education and integral formation of our students.

Before the end of the 1983-1984 Holy Year of the Redemption, she founded a prayer movement for young people that bears the name “D.O.Y.M.A.R.”: "Discipulos Orantes y Mariano-Apostólicos de la Redención," a Spanish acronym translated as "Prayerful Marian and Apostolic Disciples of Redemption." By establishing D.O.Y.M.A.R. in our apostolic works, she sought to respond to Pope Saint John Paul II´s call inviting youth to give glory to God by following the different vocational paths in the Church with the desire to serve Christ with their entire life. Today this Movement has also extended to the Americas. Public Association of Faithful DOYMAR.

God forged her as a foundress.

In early 1958, she accompanied Mother María del Carmen Altimiras to Rome to ask for the support and guidance necessary to conserve the spirituality and the religious lifestyle of the Province of Spain. Once they received the blessing of the Church, she waited with trust for God's timing. As years passed, she enhanced and enriched the original foundational charism within the life of prayer through a profound Trinitarian emphasis and with the spirituality of the great Spanish mystics. She also expanded the mission with the new dynamism marked out by the doctrinal guidelines of the Holy Father, Pope St. John Paul II, as found in his writings concerning the consecrated life and the apostolic life. In this way, Mother María de Jesús contributed specific characteristics to the way of living the charism and the religious life through God´s inspiration in her.

She always remained faithful to the true spirit, the foundational charism and traditions, written and compiled by her in the Statutes lived out by the Spanish Province since 1969, and passed this fidelity on to each one of the Sisters. All of us found in her an understanding and maternal heart that formed and built a well-united religious family.

She personally founded 39 of the current 43 communities of our Institute.

In each apostolic work, our Mother knew how to be open and docile to the Lord´s inspiration to meet the needs of the souls being served in the apostolate while upholding unity among all the Sisters. This effort to foster unity is especially reflected in our way of life that seeks to conserve our charism as strong and alive as possible in the Church. Leading our religious family, she endowed our community and fraternal life with her own particular charism characterized by ardent charity, thus sealing each apostolic work that she welcomed in the name of the Institute with a specific style. In addition, our Mother always gave the Sisters´ families a very important place by lovingly welcoming them into the family of the Institute and showing the profound desire to do them the greatest spiritual good and to care for their physical needs. She considered the parents of the Sisters to be the main benefactors of the Institute to whom we owe our primary attention and help. She deeply loved her own family and always devotedly looked after the good of their souls and their spiritual needs.

She faced obstacles (especially those related to material resources at the moment of starting new apostolic works) with great abandonment to the Providence of God, but also with great prudence, moved by the desire to do good for souls and safeguard the spiritual life of the Sisters.

With these noble ideals and with particular persistence and docility, from 1993 to 1998 she persevered in appealing to the Holy See on behalf of the Province to ask that it be constituted as a new Institute born of the charism of Fr. Jules Chevalier (Founder of the Missionaries of the Sacred Heart and later of the Daughters of Our Lady of the Sacred Heart of Issoudun in 1874) with a new spirituality, apostolic mission and community life.

New Institute in the Church 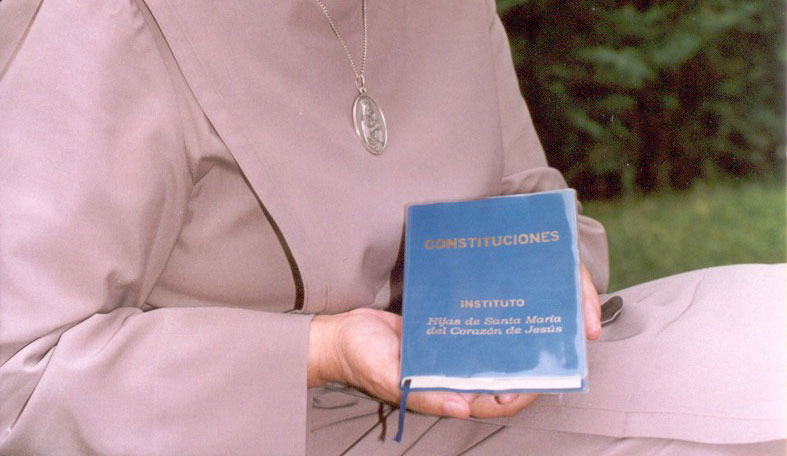 On the Nativity of the Our Lady, September 8, 1998, the Church recognized a new Institute of Pontifical Right, that of the Daughters of Holy Mary of the Heart of Jesus, to which Mother María de Jesús had given its identity, spirit and life and for which she had fought without sparing sacrifices. For this reason, on October 4 of the same year, during the celebration of the first General Chapter, she was elected unanimously (except for her own vote) as Mother General of the new Institute because all its members, we consider her and feel her to be our Mother Foundress.

She wrote our Norm of Life and our Spirituality in the Constitutions which distinguish us as Daughters of Holy Mary of the Heart of Jesus. These were approved by the Congregation for the Institutes of Consecrated Life on the day of the Nativity Our Lord, December 25, 1998.

During the last years, our Mother lived with a profound supernatural spirit, withdrawing from all responsibility. She longed for the definitive encounter with Him who called her and led her to accomplish this work in the Church.

During the three years that she was bed-ridden due to her illness and to the limitations of her advanced age, she encouraged us by the offering of her life for the Church, for the Pope and for the holiness of priests and of the Institute that she founded. She did so very naturally and joyfully, with the blessing of the daily reception of the Eucharist and the frequent reception of the sacraments of Penance and of the Anointing of the Sick.

On the 9th of March, 2021, at 5:30 a.m. in the General House, she left us to go to meet our Lord, with an exemplary death, full of peace and grace. Let us pray for her soul and trust in God the Father, the Son and the Holy Spirit who rewards his children who have been faithful.

We, her daughters, together with all who have known her and have received so many spiritual and corporal goods from her, now intone a hymn of thanksgiving to God for this life.

Do the will of God always and love each other very much.

For all those who desire to send a personal testimony about the work and person of Our Mother María de Jesús, we offer you this link.

We ask that the testimonies be signed with name, last name, date and place where they are written.
THANK YOU FOR YOUR COLLABORATION. 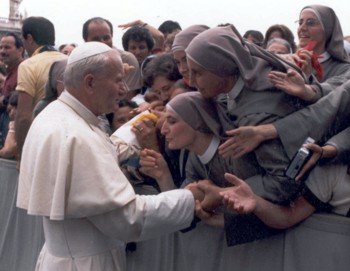 1983 - Meeting with Saint John Paul II in a General Audience 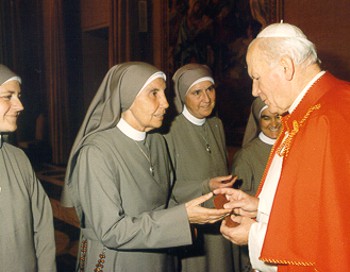 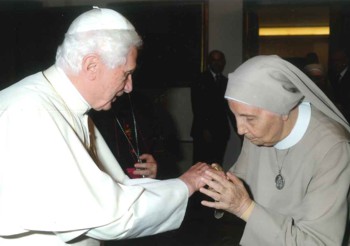 2011 - Meeting with Pope Benedict XVI in the Nunciature in Madrid 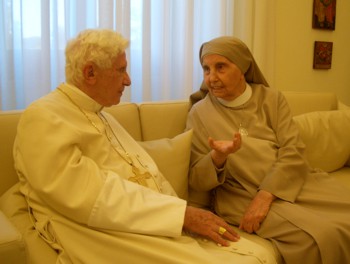 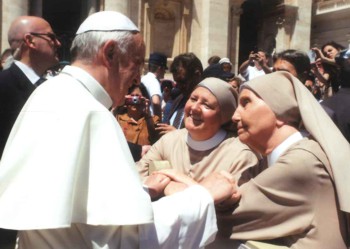 2014 - Greeting to Pope Francis in a General Audience 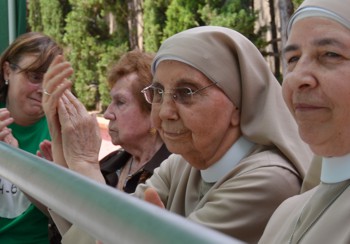 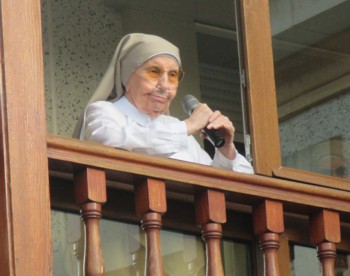 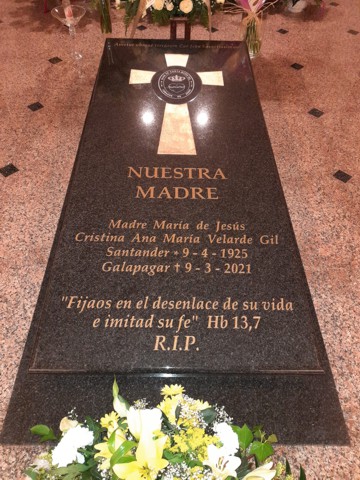 Visits to the Americas 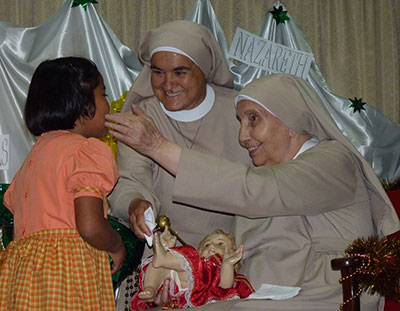 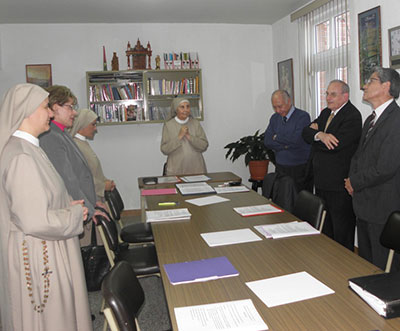 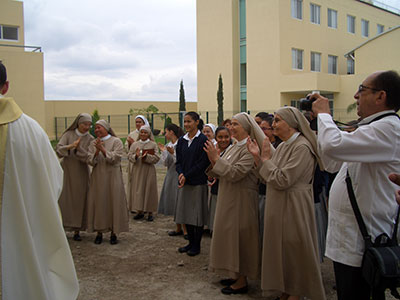 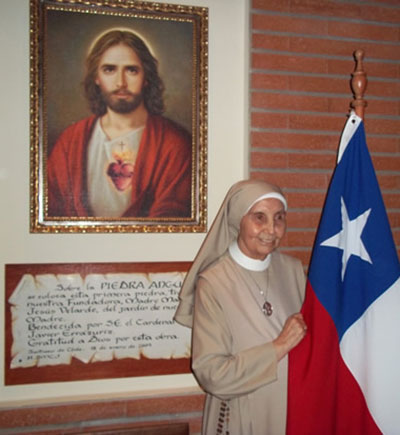 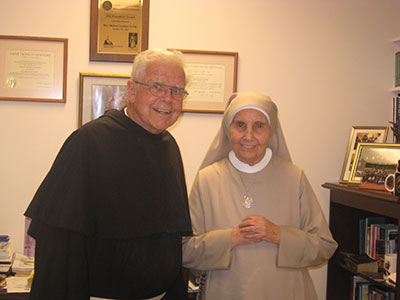 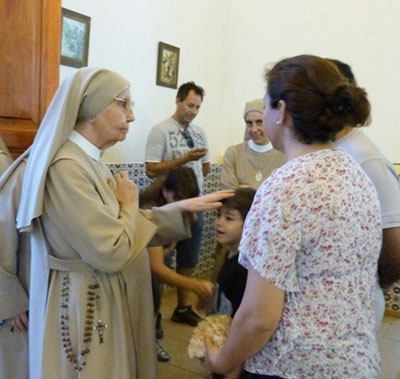 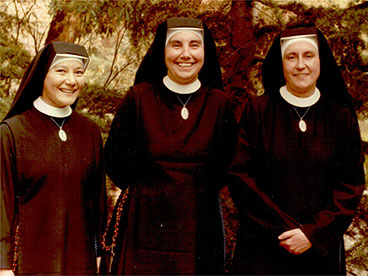 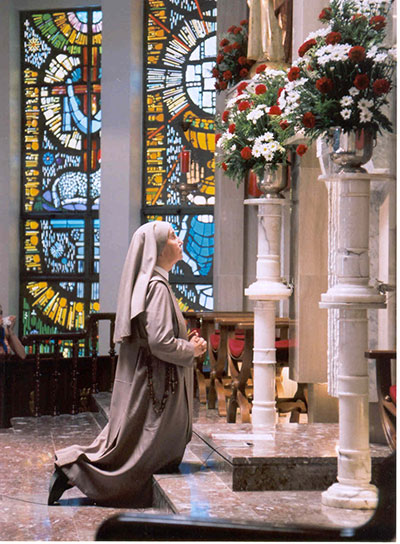